Czech conductor Petr Popelka began his tenure as Chief Conductor of the Norwegian Radio Orchestra (KORK) at the beginning of the 2020/2021 season. The orchestra offered him this honourable position after a very successful joint tour of Norway in September 2019. At the same time he will also became Principal Guest Conductor of the Janáček Philharmonic Orchestra Ostrava.

On taking up his post in Oslo, Petr Popelka conducted works by ten composers –from Bach to Boulez – in two concerts. Otherwise, the focus of the season will be the music of Beethoven (including a concert with all the scherzos of the symphonies) and a recording of all the orchestral songs of Sibelius.

In the 2020/2021 season Petr Popelka will also make his debut with renowned orchestras such as the Bergen Philharmonic Orchestra, the Aalborg Symphony Orchestra, the Stuttgart Philharmonic and the Deutsche Radio Philharmonie. As a prelude to the Leipzig Mahler Festival he will perform a chamber ensemble version of Mahler's Lied von der Erde with members of the Gewandhaus Orchestra. Operatic engagements will take him to the Hungarian State Opera Budapest (Carmen) and the Semperoper Dresden (Semper 2), where he will conduct the revival of Peter Eötvös' The Golden Dragon and a new production of Aribert Reimann's Ghost Sonata.

In the 2019/2020 season Petr Popelka was the first ever Conductor Fellow of the NDR Elbphilharmonie Orchester. Having devoted himself increasingly to conducting since 2016, it was only a year later that Petr Popelka was awarded the Gstaad Menuhin Festival Academy’s Neeme Järvi Prize 2017. His new career path was particularly encouraged and nurtured by Vladimir Kiradjiev and Alan Gilbert, and master classes with Peter Eötvös, Jaap van Zweden and Johannes Schlaefli also had a formative influence on his development as a conductor.

Petr Popelka acquired his music education both in his hometown of Prague as well as in Freiburg. Between 2010 and 2019 he held the position of deputy principal double bass of the Sächsische Staatskapelle Dresden, during which time he significantly shaped a series of portrait concerts captioned ‘kapelle 21’ devoted to Arvo Pärt, Peter Eötvös and Aribert Reimann, together with his fellow musicians. Performances took place at Dresdner Schlosskapelle and Festspielhaus Hellerau as well as at festivals such as Internationale Schostakowitsch Tage Gohrisch.

Next to conducting, his work as a composer plays another important role within Petr Popelka’s artistic range. In 2015, he was ‘Composer in Residence’ of PODIUM festival Mödling, where he conducted his own commissioned work Labyrinth des Herzens. Another highlight was the premiere of his Szenen for piano quartet in the Glass Hall of the Musikverein in Vienna. His own arrangements will be heard in his concerts with the Norwegian Radio Orchestra and the Deutsche Radio Philharmonie. 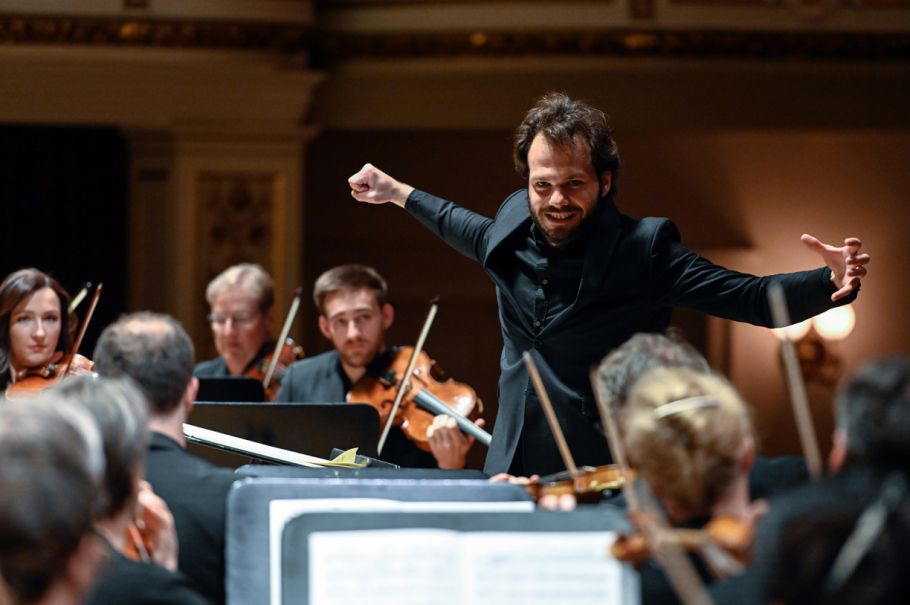